Over 40% of plants in the Brazilian automotive complex are located in São Paulo, home to the national automotive industry. The main companies located in the state are Ford, General Motors (GM), Honda, Mercedes-Benz, Scania, Toyota and Volkswagen, mostly concentrated in the Metropolitan Region of São Paulo, in Vale do Paraíba and in the region of Campinas.

The State concentrates 49% of the value of industrial transformation (VTI) and 53% of the persons employed in the national segment of manufacturing and assembly of motor vehicles, tow trucks and car bodies, according to 2011 data from the Brazilian Institute of Geography and Statistics (IBGE).

With over 2.7 million units produced in 2017, Brazil is the 9th largest producer of vehicles in the world, according to 2017 data from the National Association of Vehicle Manufacturers (Anfavea). Of this total, 1.2 million (46.5%) is produced in the State of São Paulo. 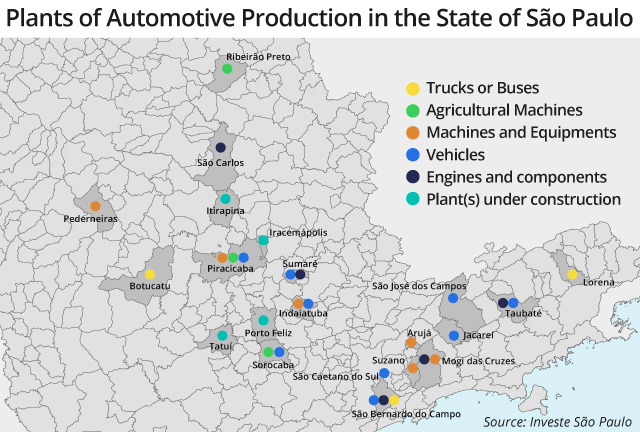 The State of São Paulo has been increasingly concentrating technological and engineering activities due to the quality and availability of its workforce, its research centers and laboratories, in addition to the consolidated presence of development centers of leading manufacturers of auto parts.

This set of attributes, coupled with the global restructuring process of the automotive industry, allowed the state to host some projects developed out of the headquarters of Volkswagen (such as Polo Sedan and Fox), GM (Celta and Corsa) and Ford (new Ka). 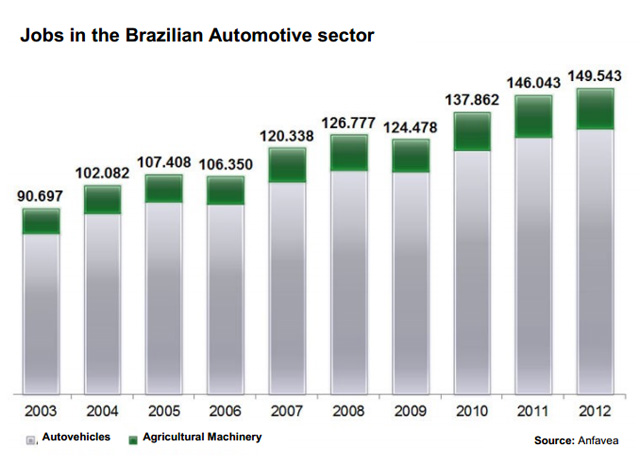 Thus, the automotive industry installed in the country experiences the novelty of being a unit that manages global projects, throughout its extension, and host the engineering that qualifies or vetoes suppliers and analyzes requests for adaptation and modification originating from other units, among other duties.

It is also worth noting the importance of projects to the strategic decisions of the national supply chain and its ability to attract investments.

According to Anfavea, the Brazilian automotive industry has attracted, over the past ten years, investments of US$ 26.9 billion, and it is worth noting that 53% of these investments (US$ 14.5 billion) were made in the last three years (2010 – 2012).

For the autoparts sector, the share of the State industry has been increasing in comparison with the total volume of Brazil, despite the decentralization of production and assembly activities. According to the IBGE, Brazil has more than 2,290 local units.The State of São Paulo is home to 63% of these companies, accounting for 64% of the value of industrial transformation (VTI) and 57% of the persons employed in the sector in Brazil (2011).

The autoparts industry in Brazil has undergone a sharp equity restructuring, from the second half of the 1990s, in articulation with the modernization and global integration process of the automotive industry. According to the Brazilian Association of Auto Parts Manufacturers (Sindipeças), in 1994, 48% of the industry's revenues originated from foreign companies of autoparts, a share that reached a volume of 72% in 2012.

Such intense internationalization and modernization radically transformed the insertion of the automotive parts industry in the global scenario: Brazil went from importer to exporter of parts. The domestic autoparts industry exports more than US$ 10 billion annually, and the State of São Paulo accounts for about 59% of that amount (Sindipeças – 2012). 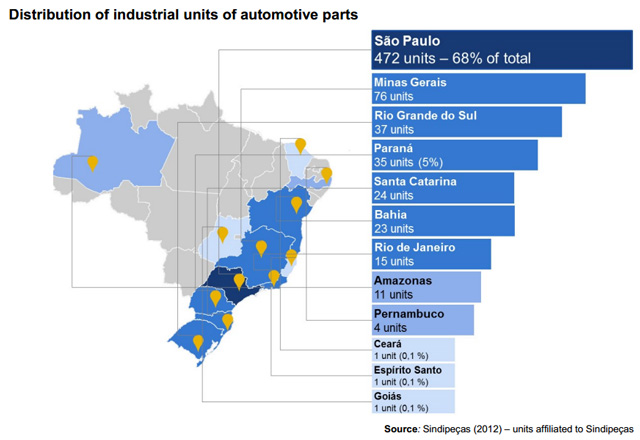 Tax incentive program that enables automakers in the State of São Paulo to use the accumulated ICMS credit (movement of goods and services tax) on the modernization of their plants, construction of plants and development of products.

In case the company does not have accumulated credit or ICMS credit balance, the initiative also allows the grant of suspension or deferral of tax due on importation or domestic purchase of machinery and equipment intended for the property through special arrangement, aiming to relieve investments made in capital assets.

With an area of 688 thousand square meters, the site includes technological innovation programs associated with projects for the conversion of sources of biomass into renewable fuels. It has an incubator to house industrial or service companies in their nascent stage. Learn more: www.parquetecnologico.piracicaba.sp.gov.br

Why invest in the Automotive sector in São Paulo?