São Paulo occupies a prominent position in the production of biofuels, which account for 30% of the total supply in the state energy matrix, according to the 2013 Energy Balance of the State of São Paulo (Beesp), developed by the Department of Energy (SE). In addition to the weather and soil favorable to the cultivation of raw material, the State concentrates large part of the technological research and development, gathering a significant portion of the capital goods industries and assuming an important role in professional training. In addition to these factors, there is a large consumer market and excellent logistics.

Although the use of biofuels is seen as a national priority by leaders from several countries, the global renewable energy consumption is only 13% and the share of biofuels only reaches 1.8% (International Energy Agency – 2011).

In contrast, the leadership of São Paulo in renewable energies stands out worldwide. Approximately 52% of the Internal Energy Supply (OIE) of the State is formed by renewable sources, and only sugar cane products account for 29% of the total energy supply (Beesp – 2013).

Between 2001 and 2010, the State energy production increased approximately 93%, mainly due to the share of renewable primary inputs, such as sugar cane juice, molasses, bagasse and bleach (Beesp – 2013).

Ethanol has the potential to partially replace fossil fuels in means of transportation, with special advantages in terms of environmental sustainability. Ethanol from sugar cane for use in vehicles is a world reference.

According to the Sugar Cane Production Monitoring System (Sapcana), in association with the Ministry of Agriculture (Mapa), the production of ethanol in São Paulo increased 64.4% between 2003 and 2012, when more than 11.6 billion liters were produced, accounting for approximately 51% of total domestic figures.

Over the past 30 years, the improvement of manufacturing processes of ethanol required intense technological development in agricultural and industrial production (generation, import, adaptation and transfer of technologies), infrastructure, logistics and end-uses.

In addition to being a major producer, the State of São Paulo is one of the largest consumers of biofuels in the world. About 90% of vehicles sold in 2012 in the state use the flex fuel technology, which allows vehicles to operate more than one type of fuel in the tank (ethanol and gasoline), and virtually all gas stations in Brazil offer ethanol as an option. 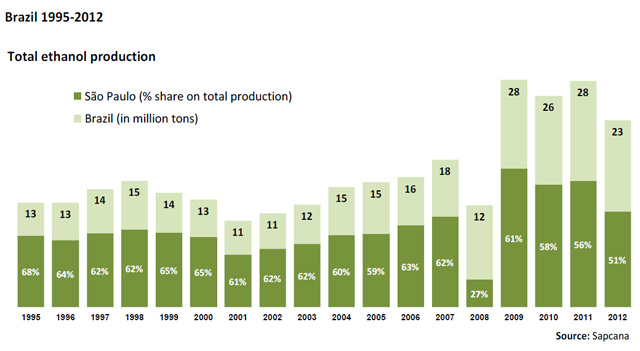 Biodiesel is considered environmentally friendly because it contributes to the reduction of pollutants in the atmosphere, it is renewable and do not contain sulfur. Usually, biodiesel is produced from oilseed plants such as castor, palm, sunflower, soybean and peanuts, among other crops.

The large number of existing meat packing plants and slaughterhouses in the State has a production potential of up to 200 million gallons of animal fats per year, which also creates favorable conditions for the production of biodiesel from tallow.

According to the National Petroleum Agency (ANP), the State of São Paulo has produced more than 158 million gallons of biodiesel in 2012.

To support the progress of the area, the Bioenergy Research program (Bioen), held by the Research Foundation of São Paulo (Fapesp), focuses on the stimulation and articulation of research and development activities, using academic and industrial laboratories in the promotion of knowledge and its application in
fields related to bioenergy production in Brazil. In 2012, US$ 5.9 million was invested in research projects funded by Bioen (Fapesp – 2012).

Why invest in Biofuel in São Paulo?