When the Portuguese Martim Afonso de Souza built the first Brazilian sugar mill on the coast of São Paulo, he could not imagine the complex production sector that would be built in São Paulo to process sugarcane.

After almost 500 years, the territory of São Paulo has a planted area that covers 5.6 million hectares, where 442.3 million tons of sugarcane were produced, which generated R$ 27.6 billion, according to data from the Municipal Agricultural Research - IBGE 2016.

The development of the sector was due, among other things, to projects developed by the Brazilian government, such as Proálcool [National Ethanol Program], the organization of producers of the sector into entities and the need for alternatives fuel sources to oil.

Brazil is the world’s largest producer of sugarcane, and São Paulo alone accounts for 55% of the planted area in the country. Most sugarcane processing mills in São Paulo can choose to produce sugar or ethanol.

This is a competitive advantage of the sugar-ethanol sector in the state in relation to the US corn-based industry. In the US, corn processing plants must first produce sugar to then produce ethanol.

The plantations in São Paulo have high productivity per hectare. This is due to the research studies conducted by public and private research institutes, in addition to, of course, soil quality and favorable weather conditions. The SP81-3250 variety developed at the Canavieira Technology Center, in the city of Piracicaba, is the most planted sugarcane in the country today.

The 172 mills established in the state correspond to 42% of total mills in Brazil and accounted for 56% of the sugarcane crushed nationwide in the 2016/2017 crop, according to data from the Sugarcane Industry Association - UNICA.

They produce large part of the ethanol used in flex-fuel vehicles in Brazil. A revolution in the national automotive market, bi-fuel vehicles were launched in 2003, with engines capable of running on hydrous ethanol, gasoline, or a mixture of the two in any proportion. In addition to benefiting the planet by reducing the emission of carbon dioxide, drivers have the option of choosing the most economical fuel when fueling their cars.

Production of Ethanol on the Planet

Leadership translated into foreign trade. Producers from São Paulo exported US$ 6.9 billion in 2016. This essential item in the cup of coffee of many people around the globe accounted for 38.6% of exports from São Paulo’s agribusiness. 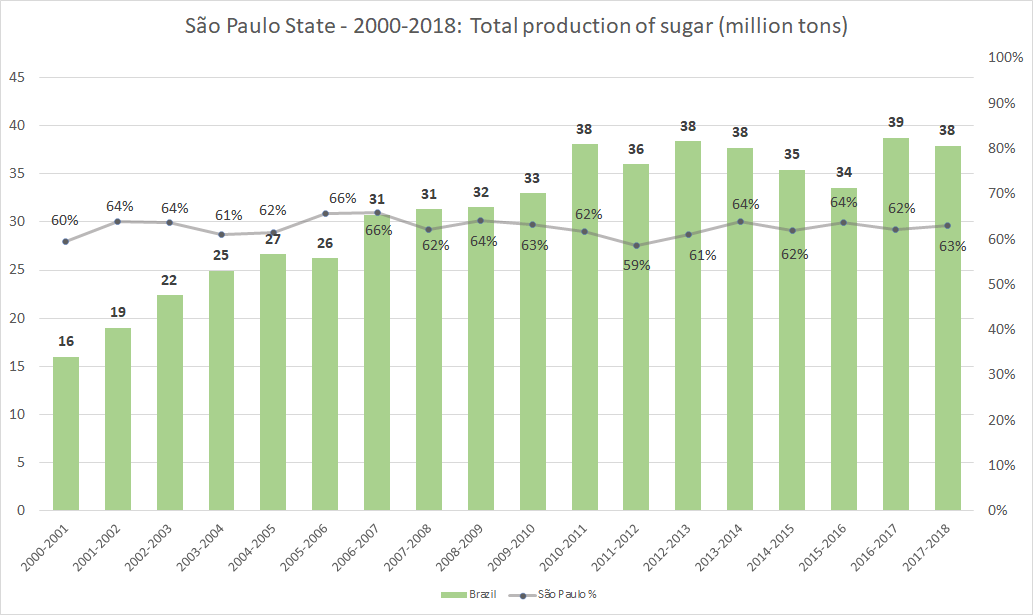 Sugar and ethanol are not the only products into which sugarcane can be processed. In 2000, a plant with capacity to produce 50 tons of biodegradable plastic from sugarcane was starting operations in Brazil. The manufacturing technology of its raw material, polyhydroxybutyrate (PHB), was developed with the participation of the Technological Research Institute (IPT) of the state government.

Technological and scientific research studies increasingly find new applications for sugarcane and its byproducts. Today, it is possible to process the sugarcane juice into an oil that replaces diesel without requiring engine adaptation. The sugarcane bagasse ash can be a substitute of sand in the production of concrete and mortar. New alcohol-chemical techniques open up possibilities of producing detergents, cosmetics and lubricants from sugarcane.

Sugarcane arrived in São Paulo in the past. Today, São Paulo takes the sugarcane products to the world and projects a promising outlook for the future.

The state of São Paulo stands out in the use of energy from renewable sources. According to a report released by the Energy Department, the share of these sources in the energy matrix of the state reached 60.8% in 2016.

Ethanol and bioelectricity made a major contribution to achieving this high rate. The fuel is used instead of gasoline, when wet or mixed with it when dry. Bioelectricity is generated by the burning of sugarcane bagasse in boilers. The mills generate electricity for their own activities, being self-sufficient, and some of these plants still produce marketable surpluses.

In calculations made by the Renewable Fuel Standard Program of the US Environmental Protection Agency, EPA, the reduction of greenhouse gases provided by the use of ethanol from sugarcane is higher in relation to other raw materials when considering the life cycle of the product, from planting to the use of the fuel in vehicles.

To reinforce its commitment to the environment, in 2007, the state of São Paulo adopted the Agro-Environmental Protocol of the Sugar and Energy Sector, with the purpose of replacing the burning of sugarcane straw with mechanized harvesting. After a decade, the Protocol avoided the emission of more than 9.27 million tons of CO2 and more than 56 million tons of atmospheric pollutants. The authorized burning area in the previous crop was only 2.5% of the total sugarcane harvest area in the state.

According to studies conducted by the United Nations (UN), Brazilian ethanol poses no risk to food safety, in addition to reporting the highest productivity in liters per hectare when compared to other alternatives. Brazil uses 2% of its arable land for ethanol production and its main sugarcane production areas are at least 2,500 kilometers away from the Amazon.

In 2009, the Agro-Environmental Zoning was launched by the Departments of Environment and Agriculture and Supply. It was created to guide the sustainable planning of the growth of the sugar and energy sector in the state of São Paulo. The survey considered the hydrographic, physical, topographic and weather aspects. In addition to the areas, rules were established for the licensing of new ethanol plants in São Paulo.

São Paulo is the birthplace of technological development and the core industry for the consolidation of sugar cane production in Brazil. Among its research institutes, it is possible to highlight:

Sugar Cane Technology Center (CTC) – one of the world’s leading centers for research and application of biotechnology in sugar cane.

Agronomy Institute of Campinas (IAC) – it studies the genetic improvement of sugar cane.

National Laboratory of Bioethanol Science and Technology (CTBE) – dedicated to the research for obtaining ethanol with high productivity, maximum utilization of raw materials and compliance with sustainable practices.

Bioenergy Research (Bioen) – program of the São Paulo Research Foundation (Fapesp) dedicated to the encouragement and coordination of research and development activities, using academic and industrial laboratories in the promotion of knowledge and its application in related areas of bioenergy production.

Piracicaba Technology Park – with na area covering 688,000 m², the site offers technological innovation programs associated with projects for the conversion of sources of biomass into renewable fuels. It has an incubator to house industrial or service companies in their nascent stage.

Bioenergy and Sustainability Research Center (NAPBS) – launched in 2011, it aims to stimulate and coordinate research on biomass and biofuel processing technologies, integrating the knowledge produced by experts from the three state universities managed by the Government of São Paulo.

Why invest in Sugar Cane in São Paulo?